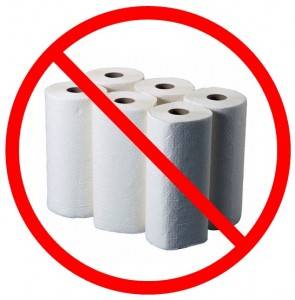 We just added a 12″x12″ Disposable Microfiber Towel to MicrofiberWholesale.com. We’ve had a larger disposable microfiber towel available for years, and people love them. Because they’ve been so popular we decided to bring in the smaller version.

These towels are great for any cleaning job that needs the cleaning power of microfiber, but would ruin a regular microfiber towel. They’re also great for healthcare applications as a single use disinfecting cloth.

Another GREAT application for these towels is at home. These towels are machine washable, so wouldn’t they make a great alternative to paper towels? According to multiple sources, Americans send 3000 tons of paper towels to landfills every year. Imagine if we could stop using so many of them and we switched to these towels? They’re cheap. They’re reusable (you can expect to get a dozen or more washings out of these towels). They’re far more absorbent than paper towels. They clean much better than paper towels. What’s not to like?

If you want to give them a try go here for ordering info!