HOW LONG DOES MICROFIBER LAST? PART 2

Last week we talked about how long microfiber lasts and I gave you anecdotal evidence about some microfiber towels that I’ve been using in my home for 5 years. This week we’re going to talk about Microfiber Flat Mops.

Like microfiber towels, how long a microfiber flat mop will last depends on three main factors. The first is how you use it; is it used to mop hardwood floors, tile floors, or concrete floors? Also, how are they washed. Are they washed in a top load washer with an agitator, a front load machine or an industrial wash setting? Are the mops only washed with other microfiber? The last factor is how the mops are constructed. Our flat mops are constructed using a foam core which helps the mop keep its shape during laundering, they also feature durable backing which remains effective and never loses its ability to be gripped by the frame. As you can see in the picture on the right, they also feature overlock stitching which will keep the mops from coming apart. 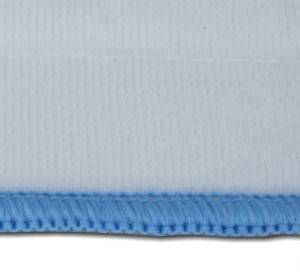 In case you didn’t read last week’s article, I hesitate to tell you that you’ll get X number of washes out of a mop or towel because the factors listed above can greatly impact the life expectancy of the textile. Now, on to the anecdotal evidence; I have a customer who runs a commercial laundry plant. They’ve been a customer for 40+ years and at the time he told me this they had been purchasing 18” microfiber mops for a little over 4 years. The mops are rented to a hospital. They’re picked up from the hospital twice a week by the route man and washed in a large commercial washing machine. My customer told me that in the 4 years of servicing the account with our microfiber mops that had never had to take one out of service. That means it was entirely possible that some of those mops had been washed over 400 times ( 2 times per week X 52 weeks X 4 years). That’s not to say that all of the mops were that old, some had been lost or stolen, but many of them had been used for that long and my customer never felt the need to throw them away because the looked so bad or didn’t do the job any more.

At my home, just like the towels, I’ve been using the same microfiber mops for the last 5 years. I have enough of them that not every mop gets washed every week, probably more like every other week. So, the mops I have at home have probably been washed about 125 times. To the right is one of my mops from home. As you can see in the close up photo the mop is still in pretty good shape. It looks a little more worn than a new mop, there’s a little bit of fraying on the edges. Also one strand of yarn has broken so it sticks out longer than the other still looped strands. Other than that it’s still totally useable and still does a great job of cleaning the floor. 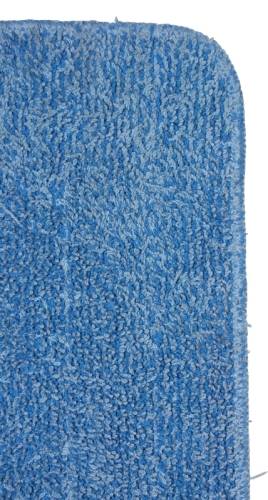