I was recently asked by a friend in the business if we had any material (charts, graphs, etc)that described the labor and cost savings associated with using microfiber mops vs. conventional mops. I couldn’t think of anything that wasn’t anecdotal with the exception of the 2002 EPA study done at UC Davis Medical Center. If you’ve never read it, you should… here it is. It’s probably had more to do with the switch to microfiber in the early to mid 2000’s in the US than any other single document, especially in the healthcare field. It’s also probably been quoted and paraphrased in more sales literature than any other piece about microfiber. 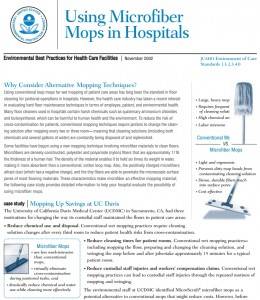 When you look through the cost breakdown something should jump out at you… the cost of the microfiber mop. $17.40 each! That’s just for the mop pad. The study never says what size mop pad was used in the study, but we can assume they were 18” since back in the late 90’s and early 2000’s there wasn’t a variety of sizes available. Now, in 2014, the same type of microfiber wet mop pad would cost as little at $2.40 each on our website.

Because of this incredible change in the price of the mop over the last decade, I thought it would be interesting to recalculate the findings of the study with the more current pricing.

Here is how the numbers broke down: