If you want a mop that's all the above, check this out

Whether you’ve moved into a new house, recently had hardwood floors installed, or are just tired of your old hardwood floor cleaning method, you’ve got hardwood floors, and they need cleaning. Hardwood floors are a great option for any home. They’re timeless, they don’t go out of style. They’re a great investment since they can last for decades and homebuyers love them. They’re also hypoallergenic and don’t emit any petrochemical emissions. Best of all, they’re easy to clean if you’ve got the right tools!

It’s important to clean hardwood floors for several reasons. Hardwood floors that are properly maintained last longer and don’t need refinishing as often. By contrast, if you allow soil to remain on your flooring it will quickly wear away the finish and degrade the flooring itself. As foot traffic moves over the floor it grinds that soil into the flooring acting almost like sandpaper. Removing that soil is the most important part of protecting your floors and keeping them looking great, not to mention it maintains its hypoallergenic properties because you’ll also be removing allergens. If you have laminate floors, check out our guide on how to deep clean laminate floors!

Of the non-microfiber methods of cleaning hardwood floors, conventional dust mops are probably the best. These type of mops, usually a blend of cotton and synthetic fibers, have been around since the middle of the 20th century and are still very common today in both residential and commercial applications. The dust mop head, paired with a frame and handle, does a great job of collecting soil. They’re efficient, relatively ergonomic and launderable. The motion you use when you’re dust mopping is the same as with a microfiber flat mop. It’s a side to side, almost figure 8 motion. You keep the leading edge of the mop moving forward, twisting it as you turn. This keeps all of the dust, dirt and debris on the front of the mop and prevents anything from being left behind. The drawback of conventional dust mops is that there’s no “wet” mop in this type of configuration, so you would need a separate handle, and a bucket to thoroughly clean your floors. Also, cotton dust mops just don’t do as good of a job at picking up dust as microfiber does. They also don’t last as long as microfiber mops. They’re available in a variety of widths all the way up to 60”. The most common size for use at home is and 18” Dust Mop or a 24” Dust Mop. We do carry these types of mops, we also have microfiber dust mops designed to be used with conventional dust mop hardware. To reiterate, microfiber would beat out conventional dust mops as the best mops for hardwood floors because they don’t pick up as much, they don’t last as long, and you’d need a separate wet mop handle. 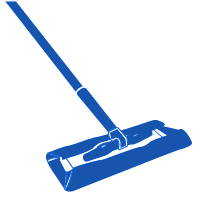 Sponge mops are only good for one thing, picking up spills… and they’re not really even great for that. Sponges absorb liquid but they don’t go a great job of collecting and picking up dirt. They’re narrow, so they’re not efficient at cleaning large areas. They’re also not launderable and they’re prone to harboring bacteria and promoting the growth of mold. When you use a dirty sponge mop you’re often actually adding more than you’re taking away from your floor! 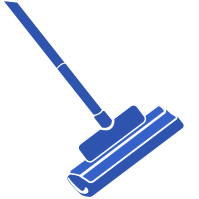 String mops, (including looped-end mops and spin mops) are a common, but somewhat inefficient and somewhat ineffective method of wet mopping hardwood. There are applications where string mops are the best mops to use, but cleaning your hardwood floors at home aren’t it. If you’re cleaning an auto shop, a school cafeteria, or the kitchen in a restaurant, a good looped-end mop, preferably made from microfiber, is a great option. At home, it’s not. The biggest problem with using any kind of string mop on hardwood is that you also have to use a mop bucket and wringer, if you don’t you’ll be leaving the floor too wet which could damage it. The popular spin mops come with a bucket that spins the mop dry. But the drawback with these is that you have to lug around the bucket while you’re mopping and find a place to store it when not in use. Another major issue with string mops is coverage. String mops, especially the mops commonly sold in grocery and home improvement stores, are small and don’t cover very much floor. This also means they require frequent trips back to the bucket to rinse and wring the mop back out. Lastly, for all the effort involved in using these types of non-microfiber wet mops, they just won’t get the floor very clean. 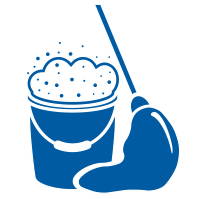 Over the last several years, Swiffer disposable mops have gained a tremendous amount of popularity. Their popularity has more to do with Proctor and Gamble’s huge marketing budget than their effectiveness, just read the reviews of people that actually use them! There are several reasons why Swiffer disposable mops are far from the best mops for hardwood floors. First, the most obvious reason: they’re disposable. We wrote an article comparing the cost of using Swiffer compared to microfiber (read about it here), Swiffer mops are exponentially more expensive than using a machine washable microfiber mop because you constantly have to replace the “cloths”. Another issue with Swiffer is that they’re really cheaply made and the handle is really short, which makes it hard on your body because you often have to bend over to use it. They also don’t clean very well and don’t have very much capacity to pick up and hold on to dirt. They’re a two dimensional piece of non-woven cloth, there’s just not a lot there, not a lot of surface area to store dirt. One more issue, and it’s an important one, is Swiffer is tiny. The head is only (measure one) inches wide. Most microfiber mops are at least twice as wide, which means they cover twice as much floor, so it would take half the time and half the effort to use a microfiber mop.

Learn more about why microfiber are the best mops for hardwood floors and why Swiffer mops can’t compare. Watch the video in which we compare Swiffer to Microfiber.

OTHER CLEANING METHODS FOR HARDWOOD FLOORS

Another method of keeping your floors clean is a broom. They’ve been around for eons and are among the most common cleaning tools there are. However, when it comes to actually maintaining hardwood floors, they’re the least effective and least thorough method. There are two things that make brooms ineffective at maintaining hardwood floors; they leave fine particles of dust, dirt and sand behind and they kick up dust into the air only to have it settle back down later. Yet, they’re effective for collecting larger debris, cleaning up dry spills and have a place in most homes. 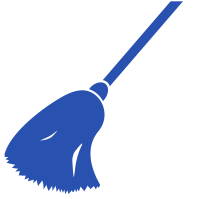 Upright, canister and stick vacuums are commonly used to maintain hardwood floors. The best vacuums for hard surface floors do not have a beater bar, which is the rotating bristle brush. Vacuums with a beater bar will damage your hardwood floor. Even though there are vacuums that are designed for hardwood floors they’re not the best method of cleaning hardwood. There are several problems with using a vacuum to clean hardwood floors. It’s an expensive piece of equipment. The top of the line hardwood floor vacuums cost upwards of $300. There is also the issue of ergonomics, carrying around a heavy vacuum and bending over while you use it is hard on your body. Another drawback of using a vacuum is it’s inefficient for two reasons. The cleaning path of nearly all consumer vacuums is just twelve inches or less. Also, the motion you use vacuum overlaps, so not only are you only covering a small area with each pass, you’re overlapping the area you just covered! 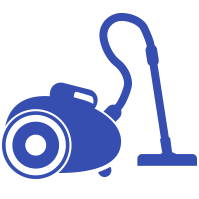 You know microfiber mops are the best mops for hardwood floor cleaning, but it’s important to know how to use them properly. Here’s our step-by-step method for using a microfiber flat mop on hardwood. For dust mopping only, you can skip down to step 2. 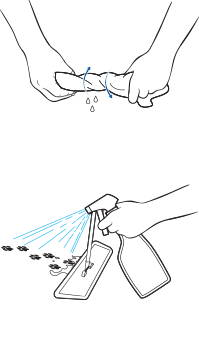 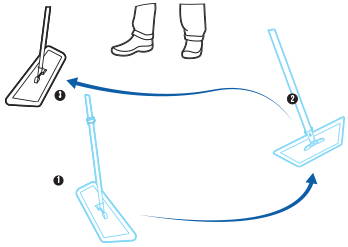 One of the great things about microfiber that makes it the best hardwood floor mop is that it cleans effectively without chemicals. Unless you need to disinfect, we recommend using dust mop pads dry and using water with the wet mops pads.

With that said, there are a plethora of chemicals and liquid cleaners on the market designed for hardwood. Most hardwood flooring manufacturers have specific recommendations on which chemicals you should use, some manufacturers have their own branded cleaners that they encourage you to purchase. Many of the hardwood floor cleaners currently on the market can also damage your floor or leave it looking dull and feeling sticky. Avoid cleaners that contain citrus oils, silicon or ammonia as they can penetrate through some seals and leave a residue that will cause the dirt to stick. Using a vinegar and water solution can also make the floor to appear dull and it can be damaging to certain types of mop systems. When required, sticking to a very mild or pH-neutral soap and water solution is best, as long as all of the solution is thoroughly mopped up. 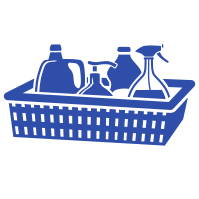 A really important, but frequently overlooked method of keeping hardwood flooring clean is matting. Mats placed at all outdoor entrances to your home, like the front door, back door, door to the garage, will prevent a lot of the soil from entering your house in the first place. It’s estimated that proper entrance matting can reduce the amount of dirt tracked into a building by 90%. You’ll save a tremendous amount of time and energy by using mats. The best types of mats for preventing soil from entering your home is nylon carpet on rubber backing. These brush and wipe your shoes clean, they’re also designed to be machine laundered. 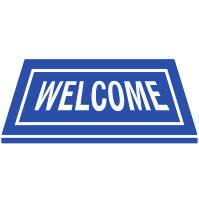